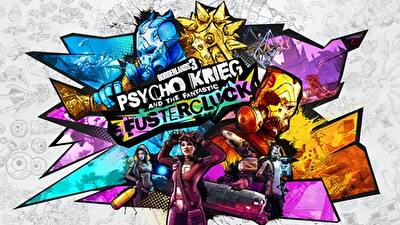 Steam
Borderlands 3: Psycho Krieg and the Fantastic Fustercluck
4 hours ago
$14.99

Epic
Borderlands 3 - Psycho Krieg and the Fantastic Fustercluck
40 min ago
$14.99

Fanatical
Borderlands 3 - Psycho Krieg and the Fantastic FusterCluck
31 min ago
$14.99

Psychos are everywhere in the Borderlands, but what makes them so uniformly deranged? Patricia Tannis theorizes they've been driven insane by the knowledge of a place she's dubbed "Vaulthalla." The key to uncovering this location lies with the most badass psycho of them all: Krieg, an unlikely ally who swings his buzz-axe on behalf of the Crimson Raiders. The only way to learn the true nature of Vaulthalla is to climb inside Krieg's chaotic mind and seek it out. This content requires Borderlands 3 to play and is included in the Season Pass.

What's New
•Journey through the demented vistas of Krieg's psyche
•Experience the world as Krieg sees it, including his perception of fan-favorite characters like Maya
•Overcome an array of life-threatening manifestations that Krieg's mind conjures up
•Expand Krieg's mind and Tannis' research in surreal side missions and Crew Challenges
•Score Legendary weapons and gear
•Acquire brain-busting cosmetic items including Vault Hunter Heads and Skins