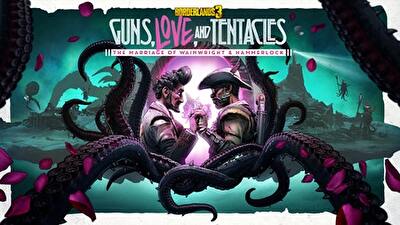 Epic
Borderlands 3 Guns, Love, and Tentacles The Marriage of Wainwright & Hammerlock
1 hour ago
$14.99

Hammerlock and Wainwright are inviting you to their engagement party on the ice planet of Xylourgos, where a gargantuan monster lies frozen above a village full of deranged occultists. Fight back against forces of otherworldly evil with the help of the galaxy's most badass wedding planner: Gaige, a former Vault Hunter who's inseparable from her robot BFF Deathtrap.

This content requires Borderlands 3 to play and is included in the Season Pass.

• Reunite with old friends and new allies to help true love triumph over eldritch horror
• Brave the bone-chilling wastes of Xylourgos, an all-new ice planet yours to explore
• Confront bloodthirsty enemies including alien beasts, hideously mutated occultists, and more
• Delve into the disturbing backstories of cursed townfolk in a host of spine-tingling side missions
• Arm your Vault Hunter with some of the deadliest gear in the galaxy, including a trove of additional Legendaries and cosmetic items