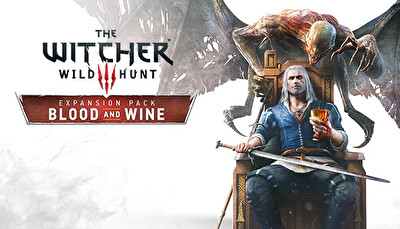 Blood and Wine is the final expansion for The Witcher 3: Wild Hunt -- an award-winning role-playing game set in a vast fantasy open world.

"Death comes to the land of wine”New region. Final quest.

Become professional monster slayer Geralt of Rivia and explore Toussaint, a remote land untouched by war, where you will unravel the horrifying secret behind a beast terrorizing the kingdom. With all trails leading to dead ends, only a witcher can solve the mystery and survive the evil lurking in the night. Introducing an entirely new realm to traverse, new characters and monsters, Blood and Wine is a 30+ hour adventure full of dark deeds, unexpected twists, romance and deceit.

The Witcher 3: Wild Hunt Expansion Pass secures your access to two epic adventures set in the world of monster hunter Geralt of Rivia. Collectively offering 30 hours of new content, gear and foes, characters both new and dearly missed while bringing to life stories previously untold within the Witcher universe.

The Witcher 3: Wild Hunt - Hearts of Stone Step again into the shoes of Geralt of Rivia, a professional monster slayer, this time hired to defeat a ruthless bandit captain, Olgierd von Everec, a man who possesses the power of immortality. This expansion to “The Witcher 3: Wild Hunt” packs over 10 hours of new adventures, introducing new characters, powerful monsters, unique romance and a brand new storyline shaped by your choices.