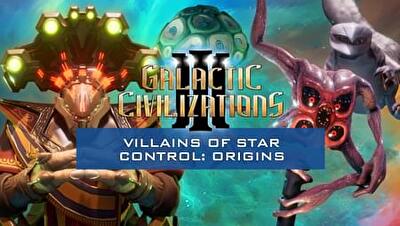 Your permission to exist has been DENIED. The Scryve - and other exciting alien species from the Star Control®: Origins universe - have come to Galactic Civilizations III! Each alien race brings a new depth of play with unique leaders, ship designs, traits, music and more.

The Villains of Star Control: Origins DLC pack introduces the Scryve, Phamysht, Xraki, and the Measured into Galactic Civilizations III. All of the new major alien factions come equipped with a unique leader, ship designs, music, and traits that make sense for that race.

Here are the new races you’ll be able to play with in Villains of Star Control: Origins:

Measured - Permission to initiate Inter-Species Interaction Level A8: granted. The Measured are an extremely bureaucratic race of sentient coral who once enjoyed a thriving and rich civilization before they were genetically modified by the Scryve. They now serve as the record keepers for the Scryve Empire, a role to which they are well suited.
Phamysht - So good to meat you! And yes, they do mean M-E-A-T. The Phamysht are a race of extremely polite cannibals who find other beings generally intolerable. The galaxy is a messy place, and they’re here to finally bring it some class and refinement, even if it does mean eating lesser races out of existence.
Xraki - CHAOS. ENTROPY. FEED! Although they are considered to be fanatical monsters by most, the Xraki weren’t always that way. They hail from another dimension and were driven mad through the evil ministrations of the Scryve Empire, who turned them into their shock troops.
Scryve - Permission to exist: denied! The Scryve are a race of immortals who weren’t always the villains. Their civilization was once filled with idealism and hope, but terrible events over time slowly corrupted them and withered their empire, turning them instead to brutal violence.