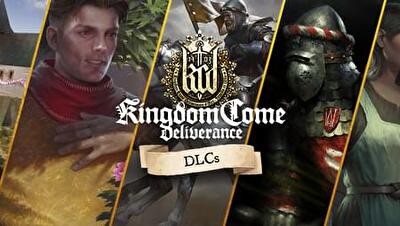 Kingdom Come: Deliverance – Treasures of The Past
$0.79

Kingdom Come: Deliverance – From the Ashes
$2.39

Treasures of the Past
Treasure maps leading to the hidden treasures of those patriots, bandits, and schemers. Including the mythical armor of the Warhorse tribe: Shrouded in mystery - it is said that the original wearer purged all the dragons from the Kingdom of Bohemia.

From the Ashes
This DLC for Kingdom Come: Deliverance introduces an entirely new type of adventure! You have an opportunity to participate in building a new village from the ground up and experience first-hand what it was like to create a new settlement.

The Amorous Adventures of Bold Sir Hans Capon
The heart of our much-loved young Sir Hans Capon is bursting with overwhelming longing for... his latest flame.

Band of Bastards
The roads around Rattay are far from safe, so Sir Radzig Kobyla has enlisted the help of an old acquaintance, the impoverished but wily Baron Kuno of Rychwald, and his infamous mercenary band. Radzig sends Henry to guide the band around the territory.

A Woman's Lot
You play as Theresa accompanied by her loyal dog Tinker. You will experience ordinary life in Skalitz and later witness the fateful events of Sigismund's raid and its aftermath from a wholly different perspective.