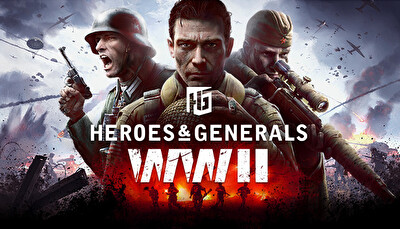 Heroes & Generals WWII is a full on, all-out WAR experience. Thousands of players fighting one massive clash of nations. The first to capture 15 cities takes the glory.

Fight alongside newfound brothers from all over the world in multiple battles raging persistently as Generals strategize and deploy resources to assist their men. As a soldier everything you do influences the war.

CHOOSE HOW YOU FIGHT

How you fight and the speed of progression is up to you.

Experience the rush of close quarter combat, the pleasure of picking off the enemy at range, the power of unleashing hell from a tank or wreaking havoc from an aircraft. The choice is yours.

MASTER YOUR OWN ARSENAL

You own and master your equipment.

Unleash the terror of the badass Panther Tank, the power of the Yak-9B fighter’s 20mm cannons, or the stealth of an M8 Greyhound. Load out with the deadly PPS-43, the legendary Tommy Gun or the rare but lethal FG-42.

65+ Weapons, 70+ vehicles and aircraft are available to add to your arsenal. If that’s not enough, you can always use your wrench to humiliate the enemy!

- Choose your fight: as Infantry, Recon, Tank Crew, Paratrooper or even Fighter Pilot.
- Fight in close-quarters, Infantry encounters; in larger skirmishes with vehicles or in huge land and aerial assaults.
- Win or lose, everything you do contributes to the war.
- Unlock a vast variety of weapons, vehicles, planes & ammo upgrades.
- Earn over 35 different Combat Badges to boost your ability and get the upper hand.
- Fight the war for the United States, Germany or the Soviet Union.
- Progress to become a General, gain ultimate power, strategize and deploy resources in battle for all players!