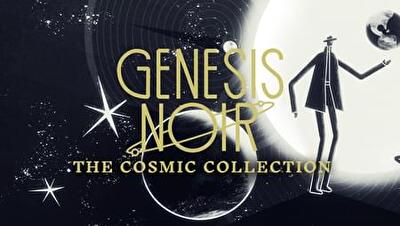 Big Bang: Music from the Universe of Genesis Noir
$9.99

About Genesis Noir
A noir adventure spanning time and space. When a love triangle between cosmic beings becomes a bitter confrontation, you'll witness a gunshot fired by a jealous god—otherwise known as The Big Bang. Jump into the expanding universe and search for a way to destroy creation and save your love.

About An Act of Creation
Learn more about the development of Genesis Noir with the game’s very own digital artbook, An Act of Creation. Its pages are filled with concept art, storyboards, sheet music, production screenshots, artist's insights, reflections from the creators, and so much more! Uncover artistic process behind Genesis Noir. See everything from the smallest of designs to the sprawling concepts for this cosmic adventure.

About Moiré Noire
Download the interactive Moiré Noir digital comic by Evan Anthony and Jay Quercia and learn more about No Man's history leading up to the events of Genesis Noir. Before No Man was searching for a way to save his love from a cosmic gunshot, he had his own story worth telling.

Much like the game itself, the moiré effect of this comic reveals the complex nature beyond the surface of seemingly basic concepts.

About The Original Soundtrack
Tap your foot to moody noir atmospheres at your local all-hours diner, freak out with hip cats in a bustling metropolis, or float through the infinite cosmos, transcendently guided by spiritual jazz.

Dive into the depths of the universe of Genesis Noir with Big Bang: a collection of in-game soundtrack material that has been rearranged, augmented, added-to, enhanced and crafted into a well-rounded album listening experience by the game’s composers Skillbard. Expect new vocals, new sax solos and other surprises you’ll only hear on Big Bang!