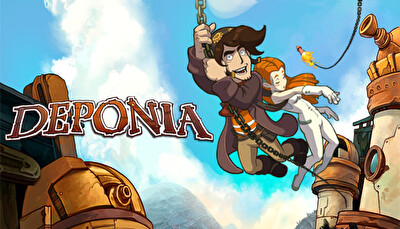 GamersGate
Deponia
1 hour ago
$9.99
In order to buy Deponia, select the offer that suits you from the list. Click on it, after which you will be taken to the store website where you can buy Deponia.

Rufus is not a pleasant guy. Ill-tempered and entirely too convinced of his own greatness, he lives at the edge of a small settlement somewhere in the most remote sector of the garbage-covered planet Deponia. He dreams of a better life in the floating cities of wealth and beauty high above the planet surface. When the angelic Goal falls from these privileged spheres down into a neighboring trash heap, Rufus sees his chance. He decides to bring the unconscious beauty back to her home. Only a vague hope of making it off Deponia at first, he soon formulates an unscrupulous plan, as he learns that he is a dead ringer for Goal’s upper-class husband. The planned handover is only the beginning of a wild chase across Deponia full of twists, turns and mystifying mix-ups.

Deponia is a fast-paced comedy of errors and one of the most unusual love stories in gaming history. The twist-filled story takes its off-beat characters all over trash planet Deponia, a unique game world in the style of Douglas Adams, Terry Pratchett and Matt Groening. From Kuvaq, an improvised village built inside a giant trash heap, to the swimming black market and the dark corners of the elevated planetary railways: The new adventure game from the makers of The Whispered World, Edna & Harvey: The Breakout and A New Beginning is brought to life with detailed hand-painted backgrounds in widescreen format and top-quality cartoon animation.