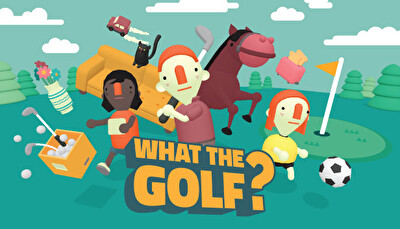 Buy WHAT THE GOLF?

Sure, it has ‘golf’ in the title but that’s about where the similarity to golf ends. WHAT THE GOLF? is at heart a comedy game with puzzles, challenges and loads of surprises. Okay, so there’s a bit of what you might recognise as golf in there but loads more of what definitely isn’t! Confused? Excellent!

Try Sporty Sports!, It’s Snowtime, A Hole New World or one of the hundreds of other incomprehensible levels, featuring toasters, hot dogs, office chairs and a multitude of utterly random objects.

Come back every day to play new courses and win a bunch of more or less useful prizes.

JOIN THE COUCH PARTY… OF TWO

Grab your clubs (string of sausages, frozen rubber glove, it doesn’t matter which) and tee off into a hilarious anarchic world.

BUT I HATE GOLF

To be honest, so do we. And that’s the beauty of WHAT THE GOLF? A game made for people who hate golf, by people with no clues or respect for the game. Let’s play!