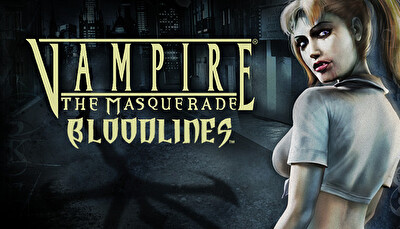 Los Angeles always had a thriving night life but no one really knows what lurks behind the glittering lights and seedy nightclubs. While mortals live their normal lives, clans of vampires conspire and scheme to further their own mysterious goals. As a newly-sired vampire, you are put to trial by the Prince of the city for your sire’s wrongdoings. A lone voice spares you from the Final Death and you become a pawn in the Prince’s plans.

Traverse the dark world of modern-day Los Angeles in Troika’s swan song, Vampire The Masquerade: Bloodlines. Visit raves and explore the secret underground caverns of Downtown to seedy hotels and exclusive mansions on Hollywood’s infamous Sunset Strip. Embark on a variety of story-driven quests as you explore an open world filled with side missions, multiple paths, and strange denizens to interact with. Yours is a living world, even though you cease to be.