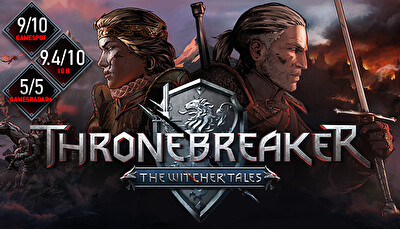 The Witcher World is Back!

Thronebreaker is a single player role-playing game set in the world of The Witcher that combines narrative-driven exploration with unique puzzles and card battle mechanics.

Crafted by the developers responsible for some of the most iconic moments in The Witcher 3: Wild Hunt, the game spins a truly regal tale of Meve, a war-veteran queen of two Northern Realms — Lyria and Rivia. Facing an imminent Nilfgaardian invasion, Meve is forced to once again enter the warpath, and set out on a dark journey of destruction and revenge.


Thronebreaker: The Witcher Tales comes with these bonus items:

How about more GWENT extras?

Please note: All the aforementioned goodies — including the GWENT in-game items — will unlock upon Thronebreaker's release. If you already have a GWENT account, please make sure to use the same credentials for this purchase so that these items get added to your GWENT profile automatically.